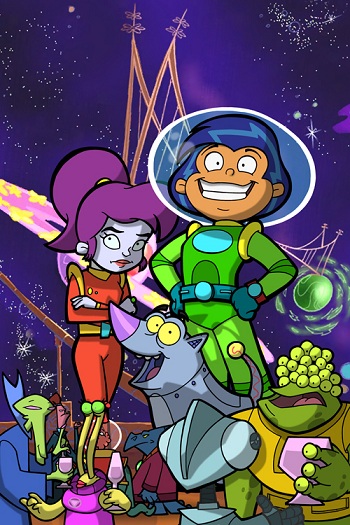 Blaster's Universe is a short-lived Saturday morning animated series produced by Nelvana that aired from October 2, 1999 to September 9, 2000 on CBS in the USA and Teletoon in its native country of Canada. It was based on the Blaster Learning System CD-ROM series, as it was reimagined in the late 1990s. The show is in continuity with other games of the era, such as Math Blaster ages 5-7.

Set in the year 2222, it chronicles the adventures of Max Blaster, a bright, impetuous 12 year old boy obsessed with science and space, and his best friend G.C., a cool 12 year old girl who looks like an earthling but is really an alien. Also joining them is a brave and loyal Robot Dog named MEL (acronym for Mechanically Enhanced Lapdog). Together, they travel across the galaxy to stop intergalactic villains from destroying their home planet of Omega.

It only ran for one season of 13 episodes, and aired in reruns on the network KidsCo in international countries like the UK and Australia until the network was canned.