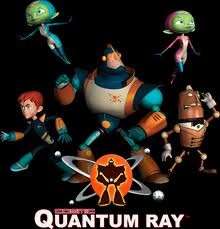 After finding an old shoebox, Robbie discovers it's a secret portal to the ninth dimension. There, he joins forces with Team Quantum, consisting of 9th dimension man Quantum Ray, robot aide Bucketworth and twin drivers Atee & Geecey, to protect the universe from various intergalactic threats.

The show originally aired on The Hub. As of July 30th, 2018, it can now be seen weekdays on qubo.