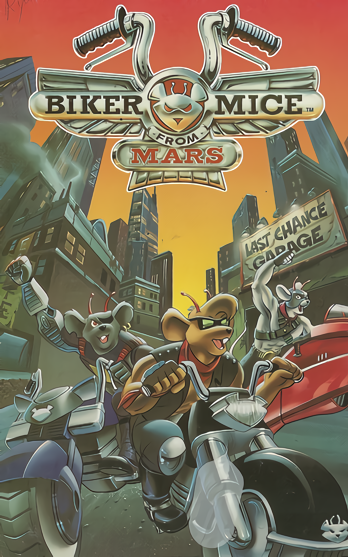 "Let's rock... and ride!"
Left to right: Modo, Throttle and Vinnie.
A cartoon about Martian mice who ride motorbikes. Wandering out in space after fleeing from their near-dead homeworld, Throttle, Modo and Vinnie are shot up by Plutarkians and crash-land in a Chicago scoreboard in the middle of a baseball game.
Advertisement:

While attempting to find a mechanic to fix Throttle's bike, they find Charley's Last Chance Garage and stop in. They find that she's being bullied by a henchman of the show's Big Bad, an alien who calls himself Lawrence Limburger, to sign over the property. Mice step in, ass gets kicked, and they all get embroiled to save the planet from the ravening maw of the Plutarkian Empire (which apparently has a practice of strip-mining and carting off everything of value on and in a planet).

Biker Mice from Mars first aired in 1993 and ran for three seasons; thanks to having the same producer/distributor, New World/Marvel, it was also paired up with Iron Man and Fantastic Four as part of the Marvel Action Universe block. (Marvel Comics also published the Comic-Book Adaptation.) The show received a Revival in 2006; in this Sequel Series, the evil aliens are a felinoid race, the Catatonians. Both series were created by Rick Ungar, with the 2006 series sporting character designs (and redesigns) by comic book artist Bernie Wrightson. There is also a licensed Nintendo DS game.

Not to be confused with another motorcycle-riding mouse.