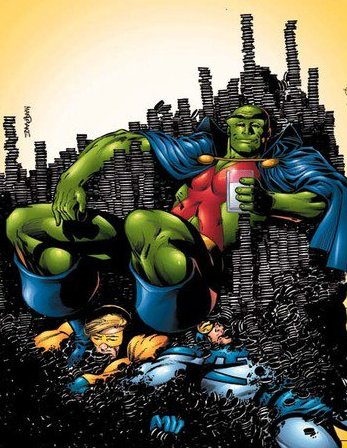 Humanity is often depicted as being quite far behind and unadvanced compared to the civilizations of other worlds. We've barely touched upon space travel, crippled by many debilitating diseases, and still succumb to waging war among ourselves. What could us Puny Earthlings possibly offer to more evolved lifeforms?

Well if there's one thing that humanity has consistently used to impress other species, is our amazing ability to cook. Advanced aliens will obsess over simple Earth foods and in some cases might trade their sophisticated technology for these delicacies. For all our shortcomings, the Earth is of value thanks to its tremendous culinary feats.

In some cases, this can be justified as a result of Alien Catnip, where some chemical in human food is literally addictive to a non-human. Despite the title, the species in question doesn't necessarily have to be extraterrestrial and can even be natives to Earth.

Subtrope of Humans Are Special. See also No Biochemical Barriers, which naturally has to be in effect for this trope to be even possible. Compare Alien Arts Are Appreciated, specifically culinary arts. For when the "human" in "human food" is literal, see To Serve Man.