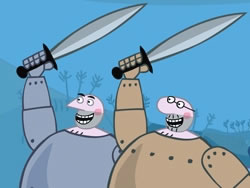 Before Peppa Pig, there was this.
"The height of two men, the weight of four, the strength of sixteen! Sir Boris, finest swordsman in the World! And his brother, Sir Morris...not the finest swordsman in the world! But the most enthusiastic! And their noble pets, Sir Horace the dog, and Sir Doris the Hamster. The Big Knights!"
—The Narrator
"FOR BORODZO, AND BOROVIAAA"!!
—The Big Knights
Advertisement:

The Big Knights was a 2000/2001 children's BBC series about the exploits of two knights doing heroic deeds in a fantasy Kingdom of Borovia. The pilot appeared in December, 1999. The show ran for thirteen ten-minute episodes before being cancelled.

The distant lands of Borovia are threatened by dragons, witches and ogres. It is up to two mighty heroes, Sir Boris and Sir Morris, to ride in and defeat these evil monsters, rescue the Princesses, and restore order to the Kingdom. Unfortunately, these two chivalrous brothers happen to be as stupid as they are strong, resulting in numerous mishaps and extraordinary amounts of collateral damage as they attempt to perform good deeds.

Humour is derived from the setting (Borovia is not actually in The Middle Ages but in the The 20th Century and extremely backwards) and from the various disasters caused by the Big Knights. Oh, and it has BRIAN BLESSED providing the voice of Sir Morris.

The Big Tropes provided by this animated series include: