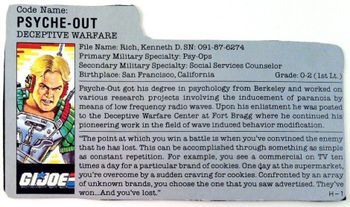 An Action Figure File Card is a brief description of a particular character included on or inside its toy packaging.

The Ur-Example is G.I. Joe: A Real American Hero. When Hasbro was preparing to revive the G.I. Joe franchise in the early 1980s, Larry Hama was hired to write a comic book based on the figures. According to this interview

with Hama, he created these "dossiers" to keep track of the toy line's huge cast: "When the guys at Hasbro saw these first dossiers, they said, 'These would be cool on the back of the blister pack!'"

The file cards started simply, featuring basic information on each Joe or Cobra member's Backstory, personality, and abilities, usually accompanied with a quote by or about the character. As the line continued, Hama's writing became increasingly clever and elaborate; he often added humor to the file cards (as this article

shows). Hasbro added file cards to many of their other lines, and several competitors (most notably Playmates Toys) followed their example, making this a popular trope for action figure packaging.

Typically, a file card appears on the back of the figure's blister card, although sometimes a trading card-like insert is used instead, especially if the figure comes with a large vehicle. Many of Playmates' Star Trek figures take both options to provide a double dose of data, as does their Mysticons line.

This is typically a simple but effective way to give life to toys, turning them from just "action figures" to full-blown characters. TF Wiki Dot Net, for example, credits these for helping Transformers win out over their competitors like the Gobots. Where the Gobots toys had no faction identification or common theme (a car was just as likely to be a heroic Guardian as an evil Renegade), each Transformers toy identified not just the character's name, but their rank, function within their respective army, and enough information to get an idea of their personality.

This was especially effective for characters who never appeared on, say, a cartoon made to advertise the toyline. As an example, Beast Wars only had 5 or 6 characters per faction on the cartoon, while there were plenty more characters who were toy only. Someone like Wolfang or Cybershark only got characterisation from the file card. This sometimes even extended to main characters: for example, in the Beast Wars cartoon several characters were upgraded in Transmetals. In the toyline, even characters who didn't undergo this process had Transmetal toys, with only the file cards describing what effect the change had on them (e.g. Butt-Monkey Waspinator was described as becoming more confident and competent as a warrior post-upgrade).

Also, some Playmates figures (Antz, Chicken Run, Coneheads) have character descriptions, but not in the form of file cards.