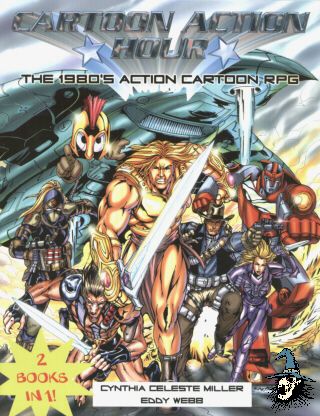 Somewhere between the silliness of Toon and the seriousness of Prime Time Adventures, there sits a book. This book is Cartoon Action Hour, a tabletop RPG that invokes the spirit of the Merchandise-Driven adventure cartoons of The '80s.

Cartoon Action Hour has a lot of a shout-outs to 1980s cartoons, including The Transformers (Transbots), ThunderCats (Action Cats), and G.I. Joe: A Real American Hero (the Inhumanoids-like Dark Brigade and the regular version as Strikeforce Freedom, replacing snake-themed villains with spider-themed villains), for example. The series that gets the most attention is Warriors of the Cosmos, which is basically a loving tribute to He-Man and the Masters of the Universe.

"Cartoon Action Hour: Season Two" was released on Oct 30, 2008. Season 3 was released Nov. 8, 2013; it marked the start of a major expansion, as several series books have been published under the Season 3 banner. These games have their own pages:

Warriors of the Cosmos

The fictional series, Warriors of the Cosmos, deals with Iconia, a once peaceful planet, now under the attack of Nekrottus's Blackskull Empire. The Big Good, King Rastor of Haven, brings together a group of heroes called Guardians of Iconia to defeat Nekrottus' forces once and for all.

The fictional series, "Warriors of the Cosmos", has the following tropes:

The fictional series Strikeforce Freedom deals with the titular military force fighting SPIDER, a terrorist organization that wants take over the world.

Strikeforce Freedom has the following tropes:

The fictional series, Transbots deals with Trevor Hastings' Transbots as they battle against Maximillian Mercy's Warbots.

Transbots has the following tropes: