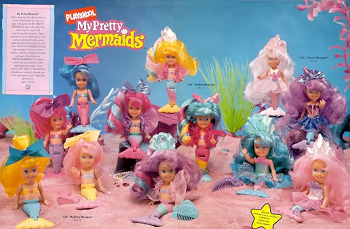 Shoo-be-doo! Shoo-shoo-be-doo!
My Pretty Mermaids is a short-lived toyline of technicolor mermaids with combable hair made by Hasbro-Playskool. The line is the final Spin-Off of My Little Pony (Generation 1), coming in in 1991, less than two years after The Little Mermaid launched the Disney Renaissance. Its year of release coincided with that of the Fancy Mermaid Ponies. My Pretty Mermaids toys have a little bit of articulation to them, which among others allows them to stand up on their fins.
Advertisement:

Only one work of fiction was produced for the toyline: a booklet/picture book titled "Wave Dancer is Missing!", unsurprisingly featuring Wave Dancer as the lead. Otherwise, any and all characterization comes from the back-of-the-box descriptions. There were also two partially animated commercials that helped the world-building along.

The My Pretty Mermaids franchise provides examples of: