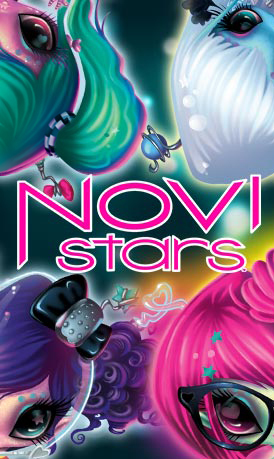 Novi Stars were a line of fashion dolls released by MGA Entertainment. It was released in 2012 and stopped production in 2013, with the last set coming out in 2014.

The franchise revolved around a fleet of alien girls who land on Earth and want to be like humans. The inital "Core 4" lineup consisted of Alie Lectric, Una Verse, Ari Roma and Mae Tallick. Each girl has a specific trait to their character, a mission how they plan to use their powers on Earth, and a certain skill they'd like to learn. Their dolls each have a special effect to it (Alie lights up, Una has glittery legs, and so forth).

The toyline also has its own short-lived web-series.