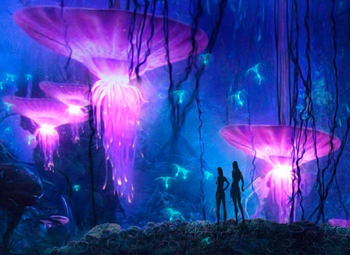 Pretty, isn't it?
"Squid skin is bioluminescent; evolved for camouflage, adapted for communication. Your average civilian calamari is a pack hunter. She uses her skin to talk to her gang. Data traffic. Very efficient. They can send different signals on different sides of their bodies, like a politician."
— Testimony Before an Emergency Session of the Naval Cephalopod Command by Seth Dickinson
Advertisement:

A Science Fiction trope: when writers think up alien lifeforms, there are several ways to make them cool, but nothing beats making them glow.

Truth in Television, as many terrestrial fungi and insects as well as a wide variety of marine species exhibit bioluminescence, including many octopi.