Best Years of Your Life 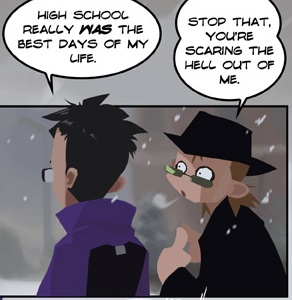 It's a depressing thought.
'"When I look back now
That summer seemed to last forever
And if I had a choice
I'd always wanna be there
Those were the best days of my life.''
— Bryan Adams, "Summer of 69"
Advertisement:

You're miserable. You're unpopular. Your erstwhile Best Friend Forever just got a look from the Alpha Bitch and charged off to join the Girl Posse without a backwards glance. The Jerk Jock is harrassing you to prove that Youth Is Wasted on the Dumb. You have too much homework and you've put it off too late. You have no time and no qualifications to make money, so you can afford nothing.

So your parents burble, "These are the best years of your life!"

A Stock Phrase frequently deployed by nostalgic adults, who want to think that Growing Up Sucks but childhood was good. Generally indicates that Adults Are Useless, as few if any stories exist where the adults are actually right to say this. When an adult is reflecting on the best years of his life, the trope is Glory Days. (Overlap is likely.)

The only person for whom this is actually true is the Future Loser.

The Anime/Japanese culture equivalent is seishun (springtime of your youth). Generally played even more melodramatically (and parodied all the time).

PSA: this is obviously meant to indicate a parent is an idiot but things do get better. Do not take this phrase to heart because it will cause spiralling.

And besides, whoever it was first said that school days are the best days of your life clearly never went to school or saw the show...