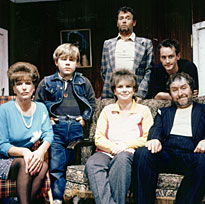 The drunken Scottish street philosopher, Rab C. Nesbitt first appeared on the seminal Scottish comedy show Naked Video. Progressing in 1989 to his own Christmas special Rab C Nesbitt's Seasonal Greet, the popularity of this much-rerun show spawned a further 8 series of alcoholic ranting. The series was broadcast nationally, despite the strong and sometimes impenetrable Glaswegian accents, which was parodied in one episode where Rab goes to London in search of his runaway son, and subtitles are used to translate the dialogue.
Advertisement:

Rab is a 40-something waster. He's never worked a day in his life, and revels in the intricacies of the Welfare system (or 'the Broo' in common Glasgow parlance). He is married to the matriarchal Mary, who holds together the family of in spite of Rab's lifestyle of booze and casual violence.

But he's not all bad, he has deep and profound thoughts about life and philosophy, and will expound them to any passer-by with the help of his rolled-up newspaper. He wanders the streets of Govan (a district in Glasgow) in a dirty blue suit and string vest, always with his trademark dirty bandage around his head from some long-forgotten head wound. Together with his eternal, scheming friend, Jamesie Cotter (and his long suffering wife Ella), Rab introduces us to a myriad of colourful and downright scary Glasgow characters.

Although comedy in intent, the series explored many dark topics, including marital breakup, murder, long-term unemployment, infertility, cannibalism and child abuse. Through several flashback sequences, we see the young Rab and his siblings putting up with a violent father who took his life failures out on his family. Rab's own family life is far from idyllic, Mary leaving him to fend for himself on various occasions, and the kids running away to London.

The final series was aired in 1998. In 2008, the character returned for a one-off, 45-minute special at Christmas 2008 which eventually led to a revival which ran for two seasons and ended with a New Year's special in 2014.