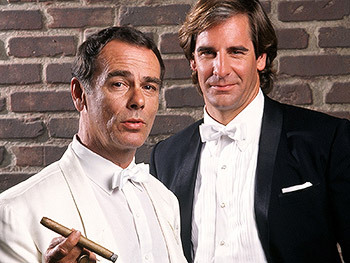 "Theorizing that one can time travel within his own lifetime, Dr. Sam Beckett stepped into the Quantum Leap accelerator...and vanished. He awoke to find himself trapped in the past, facing mirror images that were not his own, and driven by an unknown force to change history for the better. His only guide on this journey is Al, an observer from his own time who appears in the form of a hologram that only Sam can see or hear. And so Dr. Beckett finds himself leaping from life to life, striving to put right what once went wrong, and hoping each time that his next leap...will be the leap home."
— Opening Narration
Advertisement:

Quantum Leap (1989-1993) is a NBC Cult Classic series. It's about a scientist, Dr. Sam Beckett (Scott Bakula), caught in a malfunctioning Time Travel experiment that bounces him back and forth into the roles of different people in the past. The only way for him to move on from any time period he lands in is to change the lives of people there for the better. Reluctant at the role thrust upon him, Sam assumes the role of the Drifter, assisted as noted by Dean Stockwell's Al Calavicci.

The show's explanation for the time travel was basically a Hand Wave; the experiment started Sam's leaps, but afterwards they were controlled by the Powers That Be. The show also established that leaping affected Sam's memory and his own past, allowing the writers to regularly Retcon his skills and personal history (referred to in show as "the Swiss Cheese Effect"). At least once a season, Sam would suddenly be revealed to have completely forgotten about his musical career/doctorate in the specialty needed for the leap, etc. In other words, he Suddenly Always Knew That.

The format allowed for an entirely new supporting cast and premise every week. If you didn't like one episode, chances are the next would be completely different. Also a cheap format, since it made extensive use of existing period wardrobes, locations, and sets, all but eliminating the need to build or make anything for the show, save for the very rare view of Project Quantum Leap itself. Many of the episodes recognizably played off the premises of popular movies, but went in a different direction.

Though Sam would leap into a variety of different hosts, and he would appear to all other people (including Al, at first) as whoever his new host was, he would appear to the audience as Scott Bakula. At least Once per Episode, he would look into a mirror to give the audience an idea of whom he was portraying (and the actor mirroring what he was doing would usually not be any good at it).

Though it had a sci-fi premise, Quantum Leap never really considered itself a sci-fi show — it was one of the few shows to be in reruns on both the USA and Sci-Fi channels at the same time. The time travel element was just a device to tell a variety of different stories, and the majority of episodes contained no fantastic elements at all, save for Sam's leaping and Al and Ziggy's guidance. This was helped along by a rule (though broken a few times) that Sam could only time travel "within his own lifetime," so he couldn't be sent to prehistoric times or the future. This also helped keep costs down.

In late summer 2010, Donald P. Bellisario announced that he was working on a feature-film adaptation of the series but it has yet to be produced.

In 2022, it was reported that NBC had picked up a sequel series, taking place thirty years after the original

. Set to premiere on September 19, 2022, the new series focuses on a new team of scientists who revive Project Quantum Leap, with their leader, Dr. Ben Seong (Raymond Lee) now hopping through time as they try to uncover the mysteries of the experiment and Sam’s disappearance.

The Fates of Sam and Al

Al gets Beth back but Sam never gets home.

The Fates of Sam and Al

Al gets Beth back but Sam never gets home.