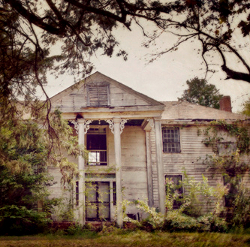 Pride comes before a fall...
The creepy, gothic version of the rural Southeast United States. Scenes show dying vegetation, decaying plantations, rusty farm implements, foreboding swamps with something lurking within, and frighteningly expressionless folk standing around doing...nothing, except staring at the protagonists.

The Southern Gothic is its own subgenre of Gothic media, characterized by bleak settings in the Deep South, flawed (and often disturbing) characters, and the darker side of the Southeastern United States including racism, sexism, and Barefoot Poverty. If you're in Louisiana, Hollywood Voodoo might make an appearance.

Unlike The Savage South where the southern areas are teeming with life (most of which wants you dead), Southern Gothic settings have a constant feel of decay, death, and malaise. Anything living there will feel unnatural on top of possibly being very dangerous. Supernatural elements are popular, especially with themes of the undead or "things that should not be" instead of the typical wild animals and hostile natives usually seen in The Savage South. Daylight Horror in stifling heat backed by the endless drone of cicadas is as common as horror dwelling in the dark far from city lights.

This trope is deeply rooted in American history. For most of civilization fabric tended to be either uncomfortable (wool, linen) or very expensive (silk), and for early adopters, cotton farming was like being able to grow gold. However, soil degradation and the development of overseas competition caused profits to plummet, and many Southern families built mansions only to find them impossible to maintain. As a result, the South became littered with decrepit properties occupied by bitter, downwardly-mobile planters. Combined with the insularity and tense social order of the region, this provided the writers who established this genre with ample inspiration.

See also Deep South, Southern Gothic's mother trope, and Hillbilly Horrors. Compare Lovecraft Country, Campbell Country, Nordic Noir, and Überwald. Compare and Contrast Weird West, which could be thought of as the sun-scorched counterpart to the dark and humid rot of Southern Gothic. Though distinct in tone and setting, the two can blend in border areas between the Deep South and the Wild West (which is to say, mostly Texas, though Oklahoma can do in a pinch). Gothic Country Music is often inspired by this aesthetic.