Literature / A Rose for Emily 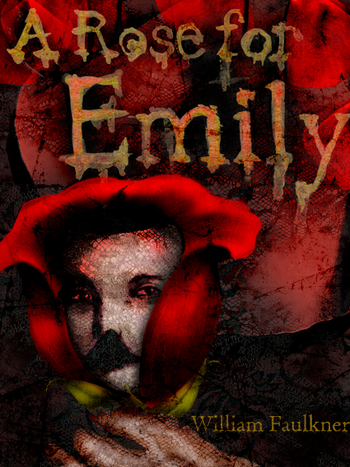 A short story by William Faulkner, published in the literary magazine The Forum on 30 April, 1930. It concerns the life of a certain Emily Grierson, as seen through the eyes of her neighbors, in a sleepy Deep South town.
Advertisement:

In a once-elegant, upscale neighborhood, her house is the last vestige of the grandeur of a lost era. Colonel Sartoris, the town’s previous mayor, had suspended Emily’s tax responsibilities to the town after her father’s death, justifying the action by claiming that Mr. Grierson had once lent the community a significant sum. As new town leaders take over, they make unsuccessful attempts to get Emily to resume payments. When members of the Board of Aldermen pay her a visit in the dusty and antiquated parlor, Emily reasserts the fact that she is not required to pay taxes in Jefferson and that the officials should talk to Colonel Sartoris about the matter. However, at that point, he has been dead for almost a decade. She asks her servant, Tobe, to show the men out.

In section II, the narrator describes a time thirty years earlier when Emily resists another official inquiry on behalf of the town leaders and the townspeople detect a powerful odor emanating from her property. Since the death of her father, two years prior, Emily has been independent but impoverished. Her lover has recently abandoned her as well when this odor begins. As complaints mount, Judge Stevens, the mayor at the time, decides to have lime sprinkled along the foundation of the Grierson home in the middle of the night. Within a couple of weeks, the odor subsides, but the townspeople begin to pity the increasingly reclusive woman, recalling that her great-aunt had succumbed to insanity. The townspeople have always believed that the Griersons thought too highly of themselves, with Emily's father driving off the many suitors deemed not good enough to marry his daughter. With no offer of marriage in sight, she is still single by the time she turns thirty. The day after Mr. Grierson's death, the women of the town call on Emily to offer their condolences. Meeting them at the door, Emily states that her father is not dead, a charade that she keeps up for three days. She finally turns her father's body over for burial.

In section III, the narrator describes a long illness that Emily suffers after this incident. The summer after her father's death, the town contracts workers to pave the sidewalks, and a construction company, under the direction of Northerner Homer Barron, is awarded the job. Homer soon becomes a popular figure in town and is seen taking Emily on buggy rides on Sunday afternoons, which scandalizes the town. They feel she is becoming involved with a man beneath her station. As the affair continues and her reputation is further compromised, she goes to the drug store to purchase arsenic. She is required by law to reveal how she will use the arsenic. She offers no explanation, and the package arrives at her house labeled “For rats.”

In section IV, the narrator describes the fear that some of the townspeople have that Emily will use the poison to kill herself. Her potential marriage to Homer seems increasingly unlikely, as Homer admits that he is "not a marrying man" despite their continued Sunday ritual. The more outraged women of the town insist that the Baptist minister talk with her. After his visit, he never speaks of what happened and swears that he'll never go back. So the minister's wife writes to Emily's two cousins in Alabama, who arrive for an extended stay. Emily orders a silver toilet set monogrammed with Homer's initials and talk of the couple's marriage resumes. Homer, absent from town, is believed to be preparing for Emily's move or trying to avoid her intrusive relatives.

After the cousins' departure, Homer enters the Grierson home one evening and is never seen again. Holed up in the house, Emily grows plump and gray. Despite the occasional lesson she gives in china painting, her door remains closed to outsiders. In what becomes an annual ritual, Emily refuses to acknowledge the tax bill. She eventually closes up the top floor of the house. Except for the occasional glimpse of her in the window, nothing is heard from her until her death at age seventy-four. Only the servant is seen going in and out of the house.

In section V, the narrator describes what happens after Emily dies. Her body is laid out in the parlor, and the women, town elders, and two cousins attend the service. After some time has passed, the door to a sealed upstairs room that had not been opened in forty years is broken down. The room is frozen in time, with the items for an upcoming wedding and a man's suit laid out. Homer Barron's body is stretched on the bed in an advanced state of decay. The onlookers then notice the indentation of a head in the pillow beside Barron's body and a long strand of Emily's gray hair on the pillow.