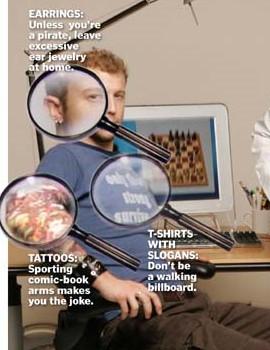 Judge Chamberlain Haller: Mr. Gambini, didn't I tell you that the next time you appear in my court that you dress appropriately?
Vinny Gambini: You were serious about that?
— My Cousin Vinny
Advertisement:

You ever see a sign outside a business that reads "No Shoes, No Shirt, No Service"? That's a Dress Code.

Anytime a place has rules for what people should and shouldn't wear. This can include uniforms, but in that case the code is simply to wear the appropriate uniform. Actual dress codes allow more freedom, especially depending on the situation.

This trope applies just as much in Real Life as in fiction.

Two of the most common places for dress codes are schools and workplaces, particularly offices. Schools which enforce dress codes may carve out exceptions, i.e. spirit wear or casual wear allowed as a reward, on birthdays, at regular intervals, or in exchange for a small donation to charity note  and sometimes a combination of the latter two . Workplaces often have "Casual Fridays." (There are still limits, of course, although on many shows the characters will take their sartorial freedom to hilarious extremes).

And this can also be in other formal situations like black tie dinners or Standard Royal Courts.

In fiction, two of the most common reasons for stating dress codes are:

Occasionally a part of Dress-Coded for Your Convenience (when at least one side actually had a dress code).

Contrast Underdressed for the Occasion and No Dress Code.

Some Cartoon Network characters cannot get service due to a dress code.

Some Cartoon Network characters cannot get service due to a dress code.