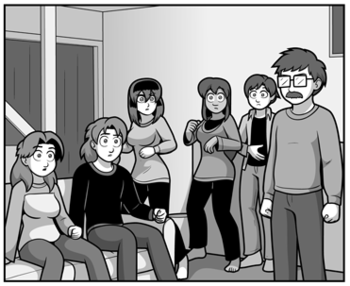 and popularised by Tangents Reviews
Advertisement:

for an explanation of why maintaining color is hard by Dan Shive. He has stated that all of the comic can be summed up in one of the main characters' quotes: "Because it sounds like one big awkward moment."

This comic is so Troperiffic that it's actually Trope Overdosednote a distinction it shares with only 4 other webcomics: Hetalia: Axis Powers, Girl Genius, Schlock Mercenary and Sluggy Freelance. Oh, and pay no attention to the art quality of the early strips. It gets better, drastically

It's about a cast of characters and their relationships while in the middle of spellcasting, shapeshifting (voluntary and otherwise), gender-bending, and seemingly disregarding the laws of physics. Or, alternately, it's about a cast of characters who occasionally take time off from obsessing over their relationships to cast spells, change shape, and break the laws of physics. The gender-bending is pretty constant, though.

The series has a heavy focus on interpersonal relationships; it's easy to get so wrapped up in the characters' lives that you forget that an inter-dimensional Evil Overlord has possibly been attempting to attack them since his last appearance (seen in a picture

) when he sent monsters to kill his dimensional counterparts in one of the first story arcs.

The comic itself is split into three publications: Main Story comics (updates M/W/F), which are a series of tightly connected storylines, EGS: NP (updates Tue/Thu/Sat), which is newspaper style comic strips that make up self-contained storylines and topical one-offs, some of which are canon with the Main Story comics, and the Sketchbook (updates rarely), a place for one-off gags, concept art, fulfilling fan requests (including Patreon commissions), special occasions (like holidays and anniversaries), and other miscellaneous stuff. There is also currently some Not Safe for Work artwork on Dan's Patreon page

, usually exclusive to Patrons at first but later made available to all both on Patreon and on Dan's Deviant Art page

It has its own wiki, Shiveapedia

, which contains the definitive timeline of the comic (which is considered canon by Word of God), plus practically exhaustive arc summaries and character bios.