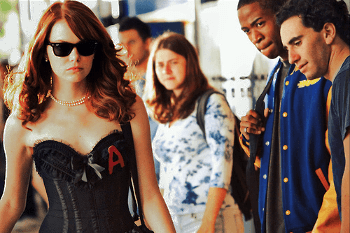 "I'm not wearing that, I show less skin to my dermatologist!"
— K.C. Cooper, K.C. Undercover
Advertisement:

Real-world High Schools that don't have uniforms will enforce Dress Codes — no short skirts, no cleavage, no profane slogans — that their students must follow. Even the most liberal public schools have some kind of limits on student attire (even if it is simply "no shoes, no shirt, no service").

Not so in fiction. If a fictional school doesn't have uniforms, there will be no rules guiding clothing at all. Female characters are the most likely to break with reality, sporting cleavage-heavy tops, short skirts and even bared midriffs. In reality, these students wouldn't make it to their first class without being sent home to change their clothes along with being given detention.

Characters who show too much off are Always Female - the guy equivalents are exposed underwear, which has been out of fashion (at least in some areas of America) since the late '00s and has never been considered effective Fanservice; and T-shirts with "controversial" slogans, which are reserved in fiction for An Aesop about free speech. On the other hand, since baseball caps make lighting someone's face difficult in live-action and are difficult to render through 360 degrees in animation, sometimes a "no hats in school" policy is mentioned to justify their near-total absence.

Contrast Parental Fashion Veto, when a controlling parent prevents this trope from occurring.