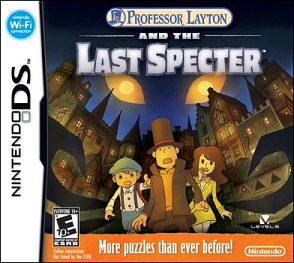 Layton is called by Clark Triton, Luke's father, to investigate the mysterious specter that appears every night in Misthallery. After reaching the city shrouded in mist, Layton finds out that many mysteries hide the truth of the city and its inhabitants...

Professor Layton and the Last Specter provides examples of: 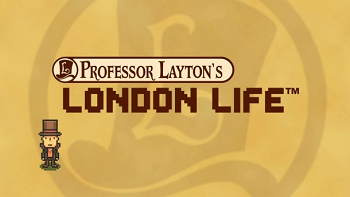 Packaged in with some (though sadly, not all) versions of the game is a bonus role-playing game called Professor Layton's London Life. You take on the role of a resident of Little London, which is entirely populated by sprite versions of characters from all of the existing Layton games. As you dwell amongst the characters, you are assigned small quests, usually in the form of acquiring a specific item for a specific individual or delivering a message from one character to another. Certain of these quests make up a storyline, which must be completed to win the game, involving Professor Layton, Luke, Flora, Inspector Chelmey, Don Paolo, and a strange mystic artifact which may or may not have something to do with fairies and/or The End of the World as We Know It.
Tropes appearing in London Life