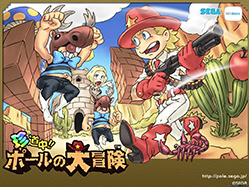 Pole no Daibouken (Pole's Big Adventure) is a 2009 Platform Game made by Sega and only available for WiiWare. With its 8-bit style, it jumps on the nostalgia wagon started by games such as Mega Man 9... but instead of celebrating the good ol' games of the past, it turns into a (not always) Affectionate Parody of them. Nothing is spared, from graphical glitches to bugs, from inane plots to the meaninglessness of Scoring Points.

As mentioned above, the plot is very bare-bones: our hero Pole must save his girlfriend Sharon from the evil Poacher, and fight his way through 6 typical platform game settings. That's it, basically, but the main objective of the game is to find and enjoy the 100 weird and zany gags hidden into it. For example, Pole doesn't get hurt by falling from ledges, but there's a place where he can break his leg while jumping down, and he will start limping until the end of the stage; on occasion there are digitized photographs spliced into the 8-bit backgrounds; random background elements can kill Pole in gory fashion without notice... Anything can and does happen, it's all very Japanese in humour, and this is probably the point why Sega and Nintendo don't want to localize it.

, Japanese only of course.

Why you should never jump right after eating.

Why you should never jump right after eating.