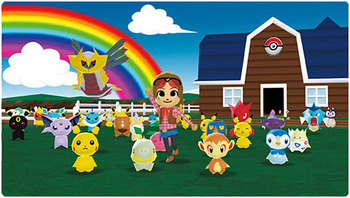 My Pokémon Ranch is a Pokémon Video Game for the Wii, developed by Ambrella, not Nintendo nor Game Freak. It was released for WiiWare in 2008, for 1000 Wii Points, or about US$10. It's mostly unplayable without Diamond & Pearl, similar to Pokémon Battle Revolution for the Wii.

It lets you transfer up to 1000 Pokémon into a Pokémon Ranch, which, despite the game's Nonindicative Name, is not run by you, but by Hayley, a friend of Bebe, the Expy of Bill in Diamond & Pearl. There, you can see your Pokémon as Super-Deformed, or chibis.

Apart from giving you a place to store extra Pokémon, it has one extra useful function: to get Mew. After you send 999 Pokémon here, Hayley will give you a level 50 Mew if you give her an Egg. Now if only the game were actually compatible with Platinum,note It is, though only for Japan, as said under No Export for You HeartGold, and SoulSilver...