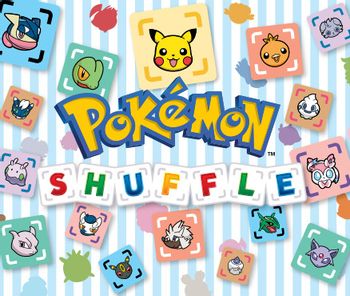 Pokémon Shuffle (ポケとる, PokéToru in Japan) is a free to play spin-off of the Pokémon Trozei! puzzle game series, known as Pokémon Link! in Europe, developed by Genius Sonority. It was first released on the Nintendo 3DS on February 2015. Its gameplay is similar to the Trozei! games, but based more on using a limited number of moves and building combos than on clearing the board.

This game incorporates the Mega Evolution mechanic introduced in the main series games Pokémon X and Y. After obtaining its Mega Stone and placing it at the head of your team, matching enough of a Mega-capable Pokémon's icons will trigger its Mega Evolution, giving it a new ability, which includes clearing tiles in various patterns and clearing opponent disruptions.

The game being free to play, it comes with a hearts system that regenerates one every thirty minutes and microtransactions similar to many mobile phone games.

Speaking of mobile phone games, Shuffle finally did get an iOS and Android port in August of 2015.

On July 2018, Marshadow was added to the game, thus concluding the game's update cycle. Although the game remains in service, there are no plans to add any further content. The game would later be followed by Pokémon Café Mix on the Nintendo Switch in 2020.