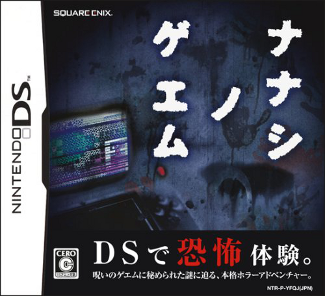 Rumors have been circulating about a Role-Playing Game for the TS (a portable game system that looks suspiciously familiar) that has recently grown in popularity; people say that the game is cursed. The rumor goes that if someone doesn't complete the RPG in a certain number of days, they will die.

You are one of those who have played the game.

You didn't put much stock in the rumors at first until you visit your friend Odaka's apartment and find him dead. Suddenly, you realize that the things that happen in the game are happening to you in real life, and death is approaching you. As the clock ticks down, can you find a way to escape the curse?

Nanashi no Game ("The Game with No Name" or "The Nameless Game") is a Survival Horror game by Square Enix for the Nintendo DS that takes place in two worlds: the real world, and the 8-bit game world of the cursed RPG. The actions taken in the game world give clues to what's happening in the story, while the real world has you exploring places while avoiding the ghosts of previous victims. A sequel, known as Nanashi no Game: Me (the subtitle translating to "Eye"), features a new protagonist, the cursed RPG, and a cursed platformer, was also released for the DS, and counts with independent versions of both cursed games, subtitled as Chi ("Blood") and Goku ("Prison") on DSiWare.

In January 2012, Square Enix also released two spinoffs of the series called Nanashi no App and 774 Deaths for iOS and Android, which follow the same pattern of story of the previous games but now with an unavoidable downloadable app for your smartphone which messes around your camera and mail apps, in which you need to try to resolve not only the mystery but also try to save your life.

It is also suggested for those who truly enjoy horror games to listen to the game with earphones.

This series of games provides examples of: