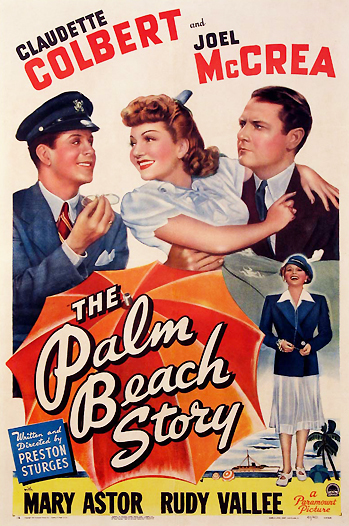 The Palm Beach Story is a 1942 Screwball Comedy written and directed by Preston Sturges, starring Claudette Colbert and Joel McCrea.

The story concerns Tom and Gerry Jeffers, a New York couple who are struggling to make ends meet. Gerry (Colbert) comes up with a Zany Scheme to divorce Tom (McCrea), a struggling inventor, so she can get a new rich husband to help Tom with his plans for an above-ground airport.

Gerry runs away to Palm Beach to get her divorce—with Tom, who disapproves of the whole plan, following right behind her—and she captures the eye of one of the richest men in the world, John D. Hackensacker III (Rudy Vallée). Tom butts in and has to pretend to be his wife's brother, and he becomes the target of affection from the multiple-divorced sister of Hackensacker, the Princess Centimillia (Mary Astor). As they get deeper and deeper into this scheme, Gerry begins to have second thoughts.