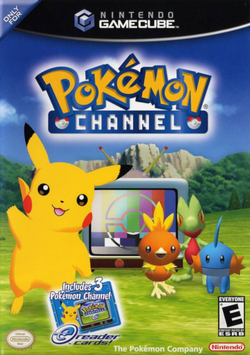 Pokémon Channel is a spinoff of the Pokémon video game series developed by Ambrella. It's the Spiritual Successor of Hey You, Pikachu!, and with its own Spiritual Successor in PokéPark Wii, it would appear the 'cute Pikachu' games - Pokémon spinoffs geared for younger players in which the main draw is Pikachu running around acting all cute - is officially a subseries.

It is a simulation/virtual pet game that is about watching TV with a wild Pikachu and unlocking new channels every real day you watch. You can also go outside the house and have the Pikachu talk with other wild Pokémon to get collectible cards.

In Europe, it was the only way to get a Jirachi, since you got one each time you beat the game. It also featured the Pichu Bros. short "The Pichu Brothers in Party Panic" that was exclusive to this game, and if you ever wondered where the game Meowth's Party from the Spaceworld 2000 tech demo that unveiled the GameCube went, it's here.

The game as a whole provides examples of:

The game also features several channels for the player and Pikachu to enjoy together.