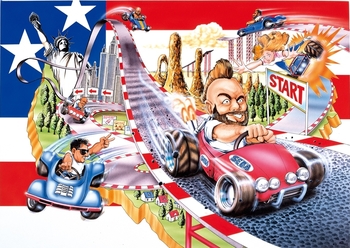 Power Drift is an arcade kart racing game released in 1988, developed by Sega AM2. The goal is as simple as a racing game can get: The game has multiple tracks to race and you, as a participant among the 12 drivers, must finish each race in third place or better in order to proceed to the next stage. What really defined the game was its excessive use of sprite-scaling to create faux-3D environment, even compared to other Sega racers like OutRun. With lots steep climbs and falls and a bunch of road logs basically flying everywhere, the game had strong "roller coaster" feel to it, and the challenge mainly came from keeping your kart on the track without falling.
Advertisement:

The game was initially ported to PC Engine by Copya Systems and published only in Japan by Asmik Ace Entertainment. Activision handle the computer ports and released them in Europe, including Commodore 64, Amstrad CPC, MS-DOS, Amiga, Atari ST, MSX, and ZX Spectrum. Years later, more accurate port was created on Sega Saturn as Sega Ages Power Drift, and another one on Dreamcast included in Yu Suzuki Game Works Vol. 1. Nintendo 3DS was released in 2014 as a part of M2's Sega 3D Classics Collection.

, which expands their 3DS port with new tracks, musics, and characters from Sega games.