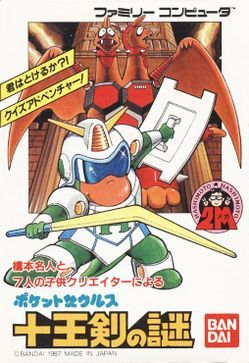 You play as Hashimoto, a nerdy guy who is turned into a dinosaur-like creature by the Emperor of Space and Time, Salamander. In order to undo this curse, Hashimoto, now known as Hashimoto Zaurus, must travel through time, from the prehistoric era to the 50th century AD, in order to gather the swords of the Ten Kings and use them against Salamander.

The gameplay of Pocket Zaurus consists of platforming sections, with Hashimoto Zaurus (called "Pocket Zaurus" in the game, PZ for short), facing off against enemies using boomerangs as his primary means of attack. In some sections, Hashimoto can pilot his time-traveling ship, the Time Capsule, in a side-scrolling shooting format. Occasionally, the game will ask the player some quiz questions, which include game-related knowledge, history, science, and more. These quiz questions award the player bonus points.

Pocket Zaurus was never released outside of Japan. In May 2015, the game received an English fan translation

with all of the level name signs translated into English and given the name Pocket Zaurus: The Swords of the Ten Kings.

This game is based on Bandai's Pocketzaurus line of stationery product toys that are in the shape of dinosaurs, which is created by Shinji Hashimoto, who worked at Bandai at the time this game was made, and also whom Hashimoto Zaurus in the game is based. Some of these toys appear as enemies in one of the stages of the game. The Pocketzaurus toy line was released in France as Diplodos, along with a short-lived Animesque series made in 1988 in conjunction with Bandai and Saban International Paris on the French television network, France 3. Wikipedia has an article on the Diplodos animated series here