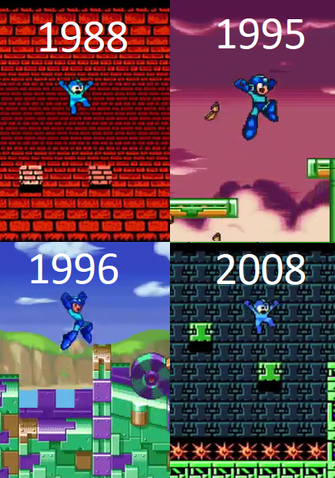 Media produced in an intentionally old-fashioned style, designed with the intentional appearance of being decades older than is actually the case. The term is a portmanteau of the Latin word "retro," meaning "backwards" or "in the past," and the French word "faux,"note Pronounced in the same way as "foe" meaning "false."

Whereas steampunk involves a setting that is faux-retro, this trope is entirely one of how the medium is painted — entirely stylistic, in other words. Film will use vintage cameras and faded colors, audio will be worn down and scratchy, and video games will look at home in the arcades of old. Some works go out of their way to open with vanity plates pulled directly from the era that they depict (see Logo Joke for that).

Retraux may involve Deliberately Monochrome, Deliberate VHS Quality, Antiquated Linguistics or Silence Is Golden, and can also lead to a Decade-Themed Filter in case on invoking 20th century period films. If it's a supposedly past speculation about The Future or 20 Minutes into the Future (i.e., the present), it will inevitably invoke Zeerust or Raygun Gothic. The presentation's outdated nature often overlaps with Stylistic Suck.

In video games, retraux is common in freeware and indie projects for practical reasons — pixelated sprites, low-polygon models, and chiptunes are a lot simpler to make than quality 3D assets, high-resolution 2D art, and orchestral studio recordings. Another emerging artform is the Video Game Demake, in which a game is adapted for an earlier-generation platform.