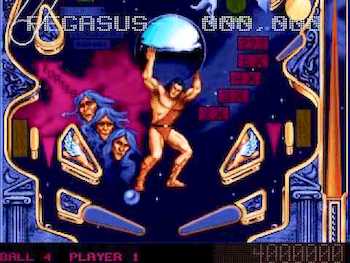 Silverball is a pinball computer game developed by James Schmalz of Digital Extremes, and published by MicroLeague. It was Schmalz's first foray into Digital Pinball Tables, and serves as a predecessor to Epic Pinball.

In the early Nineties, the shoddy PC port of Pinball Dreams was touted by Amiga computer users as evidence of the technological superiority of their platform. In response, James Schmalz and Digital Extremes created Silverball, using assembly language to make full use of the IBM Personal Computer hardware. As with Dreams, the games were played from a top-down view, either with the entire table visible at once or with a scrolling playfield two screens tall.

The first release of Silverball was in 1993, and came with four tables:

In addition to those four, a fifth table, "Nova", was available if you sent in a brochure included with the retail package. Players who did so would receive a second floppy disk in the mail, which installed "Nova" onto Silverball and enabled it on the main menu.

In 1994, after the success of Epic Pinball, MicroLeague released Silverball Plus 2, which featured the four tables from Silverball plus two more tables recycled from Epic. Once again, players could send in a brochure to get the bonus "Nova" table.

Silverball and Silverball Plus 2 demonstrate the following tropes: