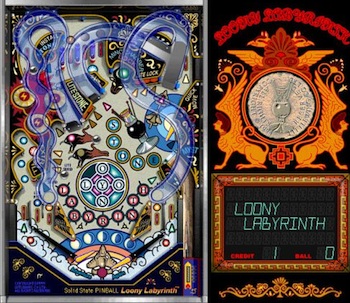 "Wait a minute, wait a minute, Doc... are you telling me you built a time machine... out of a maze?"
Advertisement:

Loony Labyrinth is a Digital Pinball Table by LittleWing, released in 1994 for the IBM Personal Computer and Apple Macintosh computers.

The title refers to the Labyrinth of Knossos, an ancient structure recently excavated on a Cretian island. At the heart of the maze is the so-called "Loony Machine", a Time Machine keyed to only work for Theseus, the warrior who is destined to slay the Minotaur. The player must explore the Labyrinth and find the Galopetra Stones needed to activate the Loony Machine, thus proving himself to be the reincarnation of Theseus. After activating the machine, he will then travel back to 2,000 B.C., rescue nine Human Sacrifices from the Labyrinth, slay the Minotaur, and return to the present day.

Loony Labyrinth was highly lauded by computer gamers, scoring 92 out of 100 points from Intelligent Gamer Online and earning the Golden Triad Award from Computer Game Review. Compared to LittleWing's earlier Crystal Caliburn, Loony Labyrinth is more whimsical and more forgiving, and never forgets to have fun with its premise.