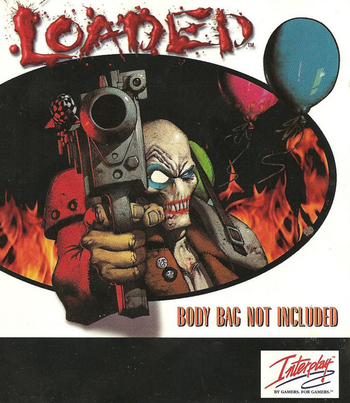 Loaded (known as ''Blood Factory'' in Japan) is a science fiction-themed top-down Shoot 'Em Up game that was developed by Gremlin Interactive (of Zool and Actua Sports fame) and published by Interplay* Gremlin self-published the game in Europe. Loaded was released in 1995 on both the PlayStation and Sega Saturn. The game had origins in DC comics and more notably the more adult-orientated Vertigo Comics, and there was a small graphic novel based on the game. The six playable characters of the game are a combination of villains, anti-heroes, psychopaths, perverts, mutants, and flamboyant murderers. They are, however, the best hope to stop the intergalactic supervillain code-named F.U.B. and save the universe. The characters were created and designed with contributions from Garth Ennis of Vertigo Comics and Greg Staples of 2000 AD.
Advertisement:

The game spawned a sequel the following year using almost entirely the same characters and the same game engine, albeit one with mildly improved graphics, named Re-Loaded. Re-Loaded was released on the PlayStation and PC at the end of 1996. Although it did not enjoy as good sales as its predecessor, it did however have an acclaimed soundtrack, this time entirely written and recorded by Neil Biggin.

A third game in the series entitled Fully Loaded was partially developed, but never released.

The game discs of both games could be played as audio CDs. Both games were notorious for their macabre sense of humour, over-the-top violence and extreme gore.