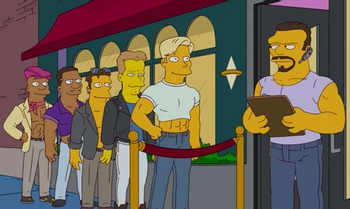 You want to Describe Bouncer Here? I don't see you on the list.

From TV and movies, one gets the impression that a bouncer is a large person, whose main job is to turn away the business of people who are insufficiently cool, or to escort out staggering, ornery customers. They also oversee the Wannabe Line. Overtly unsympathetic examples are usually portrayed as dimwitted, loutish assholes who needlessly harass patrons minding their own business and always seem to be looking for a fight to start or join in on or a sufficiently annoying patron to pound the shit out of.

In truth, most real-life club bouncers have far more prosaic duties; their job consists primarily of checking ID, tossing out rowdy, annoying, or overly drunk customers, calling cabs for patrons who are too drunk to drive home, watching for signs of trouble to come (be it the beginnings of a possible fight, patrons who are far too intoxicated for their own good, illegal activity being conducted, sexual predators getting ready to make their move, and other things of that sort), making sure VIPs are able to enjoy their evening without annoying paparazzi or crazed fans mobbing them (and often politely ushering the drunker celebs out when their behavior grows sufficiently unacceptable). Their job may include ancillary duties such as acting as the bar's janitor. The "not on the Guest List" part usually only comes up when the club is reserved for private functions or when people attempt to bullshit their way into VIP events for free by claiming that they were guestlisted.

If they work at a strip club, they will also be in charge of enforcing tipping rules, as most strip clubs require patrons to tip if they're sitting at the "tip rail" or "perv row" and give the dancers and bartenders the authority to report cheapskates to the bouncers, who can then either inform them of the rules or throw them out if they're rude or have already been warned; furthermore, they also have an incentive to skip the "warning" part when dealing with grabby or creepy customers, as clubs that are perceived as being "creep-friendly" will attract more bad customers, lead to high turnover among dancers, and will attract more desperate or low-quality dancers who can't get work anywhere else.

That said, some clubs in New York City do use bouncers to screen incoming patrons for subjective reasons. The practice started with Disco club Studio 54 in the 1970s, when the owner empowered his bouncers as doormen and made admission to the discotheque arbitrarily selective based on style and hipness (for non-celebrities, at least). This was an intentional ploy to build up the mystique of the club, and it worked like a charm. It was subsequently copied by clubs all over the city and beyond, and the entire practice has become rooted in pop culture as the "usual" way things are done.

Which it isn't, of course, since most night clubs can't afford to be arbitrarily picky about their patrons as a whole based on coolness, but bouncers are still required to screen for and refuse entry to prospective patrons who are underage, visibly intoxicated, rude or aggressive, openly displaying gang affiliation, known troublemakers and those who don't meet dress code standards or are wildly different from the normal clientele - for example letting a bunch of rich preppy types into a biker bar or metal night is likely to cause issues.

In Real Life, in contrast to the fictional depiction of bouncers as rough and tumble bruisers with a Dark and Troubled Past, the bouncer field is becoming increasingly professionalized. More and more jurisdictions are requiring police checks and training on legal knowledge and security. Bar owners are realizing that well-trained, disciplined bouncers can prevent injury lawsuits and protect the reputation of the venue by keeping out drug dealers and creeps. Another development is the increasing use of female bouncers, both to patrol female bathrooms and because women bouncers are sometimes better able to de-escalate tensions with aggressive male patrons, because male patrons are less likely to try to fight with a woman staffer.

Often overlaps with a big, Scary Black Man, and he's sometimes the only person of color on the show.

Compare No Fame, No Wealth, No Service.