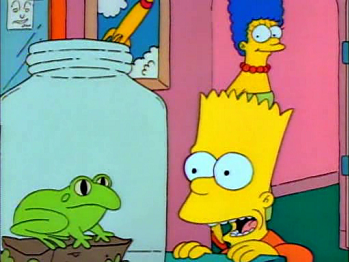 "The life of a frog. That's the life for me."
Advertisement:

Many would think Reptiles Are Abhorrent or Spiders Are Scary, but not Bob! Whether it be insects, arachnids, reptiles, or similar critters, he thinks they're just the coolest things on the planet. You're a wuss if you don't agree with him.

The morality of said boy (or tomboy) often varies. He may just be an innocent everyday kid who loves his bearded dragon and thinks bugs are cool, or an Enfant Terrible who feeds his snake cute living animals for his own amusement. Either way, expect Bob to try to taunt girls with the wild lizard he found near the pond in order to gross them out, though amphibians can take that role, too.

May be the reason why a boy is a Friend to Bugs. Also related to Slime, Snails, and Mutant Tails, for when toys are marketed towards boys with things like "slime" and "gross".