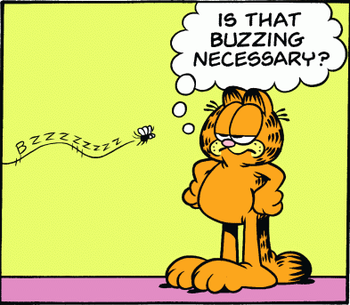 That buzzing sound flying insects make seems almost calculated to wind people up. The incessant droning often drives people up the wall or into insanity. Flies, in particular, are commonly use to deliver this effect in media as their tendency to hover around people and food combined with their inherently loud buzzing is found to be incredibly annoying by most. Stinging insects are also popular as stings are just bothersome as the annoying noises they make.

For tropes about bugs that can buzz but are disliked or negatively portrayed for reasons other than incessant buzzing, see Bee Afraid, Flies Equals Evil, and Mosquito Miscreants. See also Drone of Dread and Hell Is That Noise.