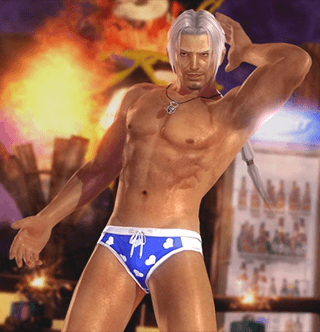 "I love a man in a speedo, it shows off the package."
— Anastasia Ashley

After excessive amounts of Ms. Fanservice throughout the years, women being used for Fanservice has become a given. A large part of fanservice involves wearing very little clothing, whether you like it or not.

So with all of these factors, many expect that women being near-naked is just part of fiction, not of any relevance. This is different for male characters. As you would expect, male fan-service usually requires some form of plot value, and in this case, the value is in being played as a show-off.

Men shown wearing very small underwear are usually used as show-offs. There may be a reason for this: as mentioned above, the only time someone wears very little clothing in fiction is when they get played for Fanservice, and because men are played for Fanservice less, they tend not to show very much skin. So writers think that men showing skin around the legs area would just be showing off something. Mr. Fanservice will often wear briefs or bikini briefs.

Some note on criteria: Examples must have some form of boasting or masculinity to them, otherwise you have one of the other underwear tropes. See Real Men Wear Pink, Man in a Bikini, and Goofy Print Underwear. A part of any good Muscle Beach Bum. Contrast Uncool Undies.