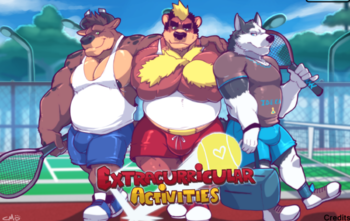 From left to right: Chester, Coach Grifter, and Spencer.
Advertisement:

This novel and all links posted here are Not Safe for Work.

and with character art by CaptainGerBear, also known as BigFingers Games Inc.

note The characters were previously handled by CursedMarked

but after about 3 years into development, he left the team. Read here

for more information. As well as background art by Gavel.

A Slice of Life visual novel where a CrestHaven University student named Eric is the only human on the tennis team and gets to explore a relationship with one of his anthropomorphic teammates: Chester, Spencer, Dozer, Dariusnote (Originally, there was only going to be 3 characters: Grifter, Chester, and Spencer. Dozer and Darius were created about a year later and is the reason why they have less days than the original three.), or even Coach Grifter, the tennis coach. The creator has stated that more characters might be added in the future.

Worthy of note is that this visual novel has exceptional writing that explores realistic characters and situations, as well as being mostly SFW. All of the characters have unique personalities, each with strengths, flaws, and quirky charms. It reaches the writing level of Morenatsu, which was one of the only furry novels to break the mold into popularity.

The novel is in development and one can gain early access by supporting it on Patreon. This grants the beta version with monthly updates and additions.note The creator stated that when the novel is finished, Patreon supporters will earn the novel for free with exclusive features while non-Patreon supporters will have access to a free public version where it will be the full game without the Patreon exclusives. There is also a free demo on itch.io

, if you would like a taste of the game before purchasing the beta version. (The demo updates monthly as well.)

note You must have a Tumblr account to access. dedicated to Q&A with the characters, usually with tidbits outside of the novel.

Compare Morenatsu, another furry novel with a similar theme and atmosphere. Compare Coming Out on Top, which is basically the human version of this novel.