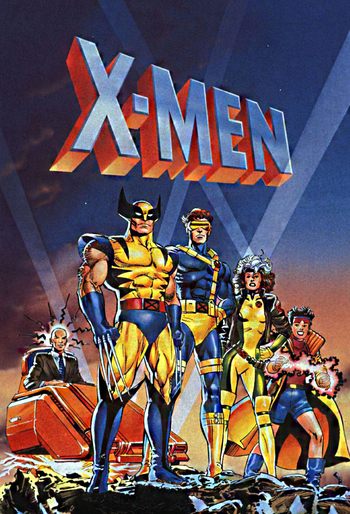 1990s animated series based on the popular X-Men comics.
Advertisement:

It was an ambitious attempt to adapt the most famous comic storylines, one of the most popular series on the Fox Kids Saturday morning lineup, and is remembered fondly despite its limited animation quality and a few less-than stellar story arcs. Lasting 76 episodes across five seasons, it is still, even in this post-MCU era, among Marvel's longest-running television shows and considered the most faithful to the original comic book version in comparison to the modern adaptations (particularly the live-action ones associated with the X-Men Film Series).

Together, they fought evil mutants, giant robots, Government Conspiracies, cosmic forces, and occasionally each other, while protecting those who hated and feared them.

Another animated series based on the X-Men comic, X-Men: Evolution, was made in the early '00s, followed by Wolverine and the X-Men (2009) in the late '00s. In 2015, this universe was revisited under the title X-Men '92 as part of the Secret Wars (2015) event and returned as a full-fledged ongoing series as part of the All-New, All-Different Marvel lineup.

On November 12th, 2021, Marvel Studios (yes, the studio responsible for the Marvel Cinematic Universe) announced a revival of this series for Disney+ entitled X-Men ‘97, set to release in 2023. Beau DeMayo (The Witcher: Nightmare of the Wolf) will serve as head writer. The series' original cast is set to return, with the exceptions of Norm Spencer (Cyclops) and David Hemblen (Magneto), both of whom died in 2020. Alyson Court will also not return as Jubilee, who will instead by played by an Asian-American actor at Court's insistence while Court is set to play a different character.

Has an under-construction characters page.