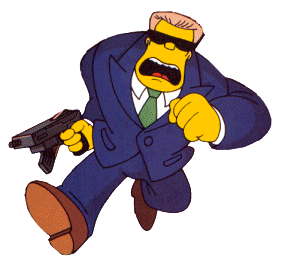 An Affectionate Parody of 1980s action stars. It could be an actor, or a character based on one of them, or a futuristic killer robot. The most common star used for this trope is Arnold Schwarzenegger, particularly exaggerating his accent (most examples use a Germanic accent, but occasionally one will have a Russian one), hence the trope name. But other stars, like Sylvester Stallone, Jean-Claude Van Damme, and Dolph Lundgren happen as well.

Common signifiers include a very obvious Fake Nationality (usually Not Even Bothering with the Accent), near-Testosterone Poisoning attitude, a Heroic Build, fondness for More Dakka in their weapon choices, and a tone of voice that fluctuates between bored monotone and enraged bellowing.

This is a subtrope of No Celebrities Were Harmed and a supertrope to Terminator Impersonator.

Shell-Shock is a brawny, cigar-chopping killer robot with a thick Austrian accent.

Shell-Shock is a brawny, cigar-chopping killer robot with a thick Austrian accent.