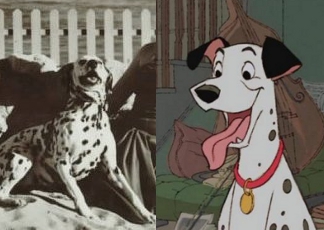 Like real pet, like animated pet.
[Bubbles] was a mongrel, but a really nice dog, and she had fitted so well into our lives. So I brought her into Xanth, where she can live the life she could not continue with us.
— Piers Anthony, author's note of Demons Don't Dream
Advertisement:

Most people love animals, especially their pets. Some authors may even put some sort of reference to a real-life animal in their work. Most often, it will be their own pet, either as a memorial or just because they love him that much.

It may be just the animal's name, similar to the human equivalent, Tuckerization. This is justified in a film if the pet themselves is playing the pet named after them; after all, it's much easier to get an animal to respond to its own name. The whole animal, not just the name, may be put into the work as well. Or, perhaps, they based an animal character off a real-life one, such as its appearance or mannerisms, even if they didn't use the name.