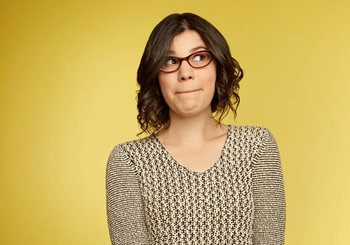 Not to be confused with Samantha Pepper.
"These things have so much to do with who you are, and there’s this idea that these are themes that should not be shared with kids, but everyone shares stories about love and attraction with kids. So many stories for kids are about love, and it really makes a difference to hear stories about how someone like you can be loved, and if you don’t hear those stories, it will change who you are. It’s very important to me that we speak to kids about consent and we speak to kids about identity and that we speak to kids about so much. I want to feel like I exist and I want everyone else who wants to feel that way to feel that way, too."
— Sugar summing up the mission statement of her entire career at San Diego Comic-Con 2016
Advertisement:

Rebecca Sugar (born July 9, 1987) is an animator, writer, composer, comic book artist, and director, best known for creating the Cartoon Network series Steven Universe, for which she has earned a Primetime Emmy Award. She previously worked as a storyboard artist, writer, and composer for Adventure Time, for which she earned two Primetime Emmy Awards. She created, wrote and illustrated the Sci-Fi dramedy, Pug Davis. She has her own Reddit account

which serves as a thorough breakdown of her thoughts and anecdotes regarding her various works.

Sugar is a proud alumnus of The School of Visual Arts, her thesis film for which, Singles, can be viewed here

: it was here that she met her longtime professional collaborator Ian Jones-Quartey; they have also been in a romantic relationship since 2008, and got married on December 4, 2019.

She also worked with Genndy Tartakovsky as a storyboard artist on Hotel Transylvania. Tartakovsky directed the animation for the Steven Universe pilot, which was used to pitch the show to Cartoon Network.

Sugar came out as bisexual in 2016, and in 2018 clarified further that she identifies as non-binary, saying that she accepts the use of both "she/her" and "they/them" pronouns.

Rebecca Sugar has worked on:

Rebecca Sugar has referenced or paid homage to: