Literature / The Cat Who... Series 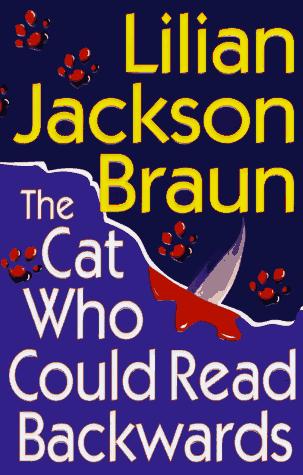 The Cat Who... series consists of a number of murder mysteries written by Lilian Jackson Braun, starring veteran crime journalist Jim Qwilleran (Yes, that's how it's spelled) and the two Siamese cats he adopts, Kao K'o Kung (abbreviated to Koko) and Yum Yum. The series begins with his life in an unnamed city as he is given assignments on odd beats, such as art or food criticism, and uncovers murders. Being what he is at heart, Qwill can never leave well enough alone once his mustache starts twitching....
Advertisement:

In the fifth book, though, the series moves away from the city and into the northern part of America, into an area known as Moose County. Initially, he's visiting for a vacation, but things take a turn for the worse when his "aunt" Fanny Klingenschoen is the Body of the Week. He then, after solving the crime, inherits her money, with the provision that he live in Moose County for five years (a period which officially ends at the start of book 13).

The series began in the late 1960s, but after three books, there was an 18-year break before any more titles were published. The break ended when Braun's second husband Earl Bettinger, whom she married well after she wrote the first books, read them and encouraged her to give it another try. Since then, future books in the series have been dedicated to "Earl Bettinger, The Husband Who..." The final book in the series, The Cat Who Had 60 Whiskers, was published in 2007. Another installment, The Cat Who Smelled Smoke, was scheduled for 2008 and later 2009, but then canceled by the publisher. Born in 1913, author Lilian Jackson Braun was nearly 100 years old and her advanced age prevented her from completing the book. She passed away in 2011, leaving the series unfinished.

See also Midnight Louie, a series by Carole Nelson Douglas that draws much influence from this one, featuring a hard-boiled feline private eye as a first-person narrator at times. Not to be remotely confused with The Cat Who Walks Through Walls, an entirely different sort of book by Robert A. Heinlein.

Novels in this series
Related books by Braun
Advertisement:

Alternative Title(s): The Cat Who