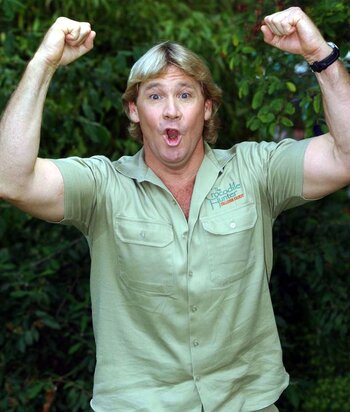 "Crikey!"
"Since I was a boy...I was out rescuing crocodiles and snakes. My mum and dad were very passionate about that and, I was lucky enough to go along."
Advertisement:

Stephen Robert Irwin (22 February 1962 – 4 September 2006), nicknamed "The Crocodile Hunter", was an Australian zookeeper, television personality, wildlife expert, environmentalist, and conservationist. He achieved worldwide fame with his television series Crocodile Hunter, which documented his generally giddy interactions with the frequently dangerous wildlife of Australia and helped him fill the shoes left open after the death of fellow conservationist Jacques Cousteau. He and his wife, Terri, co-owned and operated the Australia Zoo, and his children Robert and Bindi Sue have been eagerly following in their father’s footsteps in their love of and respect for wild animals of all kinds.

He died in 2006 after being stung in the chest by a stingray during the filming of Ocean's Deadliest. Reportedly, his last words were that the stingray didn’t mean to sting him. The documentary was aired later; the footage of Steve's death was given to Terri, who destroyed it without watching it.