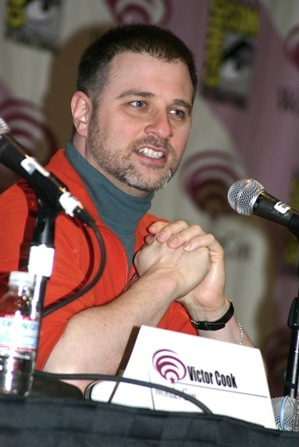 The Weisman about to speaketh...
Advertisement:

Greg Weisman (born September 28, 1963 in Los Angeles, California) is an American writer and producer. He was the creator of Gargoyles and a scriptwriter for series such as Kim Possible. He was also the supervising producer for the second season of W.I.T.C.H., the supervising producer for all of The Spectacular Spider-Man until its cancellation, and also currently produces Young Justice alongside Brandon Vietti. He also had a good run in the 1980s with his Comic Book revival and update of Captain Atom. His most recent project was a Star Wars animated series titled Star Wars Rebels, which he worked on with Dave Filoni, former supervising director of Star Wars: The Clone Wars. Can be seen as the Western Animation equivalent of Joss Whedon and Jay Wolpert.

He has also written the first two books of his own original series, Rain of the Ghosts and Spirits of Ash and Foam, a supernatural young adult book series with heavy references to Caribbean mythology and folklore. An audiobook of the first book with a full voice cast and original music has also been produced. (The kickstarter video for this project can be found here

.) As a writer for hire, he is the author of the World of Warcraft novel Traveler and its sequel, Traveler: The Spiral Path. He was also revealed to be the author of Ravnica, the conclusion to the Magic: the Gathering's "Nicol Bolas Arc" and its return to the novel format after years of online publishing.

Oh, and Rorschach's fingerprints are actually his.