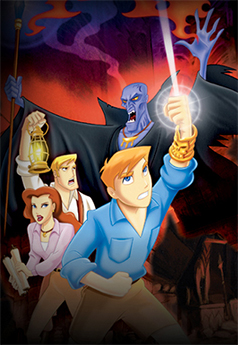 Our Mummies are Different.
"It began in Ancient Egypt with an evil High Priest named Imhotep who possessed the Scrolls of Thebes and sought to steal the Manacle of Osiris. They would give him the power to make the world his own. Fortunately, he failed.
3000 years later, the Manacle was rediscovered. But something went terribly wrong, and the mummy rose again...
Now, the race is on to find the ancient Scrolls. And in the balance hang a young boy's fate... and mankind's future."
Advertisement:

The Mummy: The Animated Series is an animated television series produced by Universal Animation Studios to capitalize on the success of The Mummy Trilogy. It premiered on Kids' WB on September 29, 2001.

Set sometime between 1920 and 1934, the characters and plot were derived from the film, but the series could not replicate its success; efforts to make it consistent with real-world features were almost non-existent as, for example, Lake Titicaca being described as both puma-head shaped and as being found below the ruins of Macchu Picchu. Also, the poor quality of the animation disappointed fans of the special effects-laden films.

It was retooled and rechristened The Mummy: Secrets of the Medjai for its second season, which began on February 15, 2003. Although the quality is considered to have improved between the first and second seasons, the show failed to find an audience and was cancelled on June 7, 2003. It eventually aired reruns on Toon Disney up until the network's rebranding to Disney XD.

Based loosely on hit films The Mummy and The Mummy Returns, the O'Connells find themselves being chased around the world by the undead corrupt High Priest Imhotep (now voiced by Jim Cummings), and his lackey, Colin Weasler, while trying to get the Manacle of Osiris off of Alex's wrist. This takes their trip across the world, trying to locate the lost Scrolls of Thebes, the only things that can remove the Manacle. However, the Scrolls had to be destroyed to prevent Imhotep from possessing the Manacle. Now in the second season, Alex is trained as a Medjai to combat the mummy as well as facing new threats along the way.