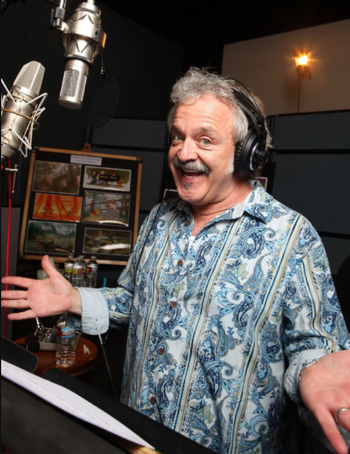 James Jonah Cummings (born November 3, 1952) is widely considered to be a successor to the late Mel Blanc. He speaks in a deep, gravelly voice for most roles, but can do many variations of it. His skills as a mimic have earned him scores of opportunities at Walt Disney Productions, in particular. At Disney, Cummings not only replaced the ailing Sterling Holloway as the voice of Winnie-the-Pooh, but later took over as the voice of Tigger when well-known ventriloquist and voice actor Paul Winchell retired, and also voiced Crud. Cummings was hired to sing the last part of the song "Be Prepared" in The Lion King (1994) after actor Jeremy Irons was unable to sing the more demanding parts of the songnote This was due to shouting a line in the song - specifically "YOU WON'T GET A SNIFF WITHOUT ME - so loud that he tore his voicebox, rather than being incapable of doing so., and he also voiced Ed the Hyena. He also sang for another non-singing actor Christopher Lloyd for the song, "In the Dark of the Night" in the animated film, Anastasia. He also played the star of the series Darkwing Duck (along with his Evil Counterpart Negaduck).

In the course of two decades, Cummings' career as a voice actor has taken him from bit parts to leading roles in major series at various studios, including Nickelodeon, Warner Bros., Hanna-Barbera, DreamWorks, and 20th Century Fox studios. His most memorable roles, however, have been for Disney cartoons. There, he provided voices for a variety of series, including leading roles in Adventures of the Gummi Bears, (taking over the character of Zummi Gummi after Paul Winchell's departure from the role), DuckTales (1987), Chip 'n Dale: Rescue Rangersnote voicing Fat Cat, Professor Nimnul, and was the second voice for Monterey Jack, replacing Peter Cullen, TaleSpin (he played Don Karnage and Louie), Darkwing Duck, Goof Troop, Bonkers (voicing both Bonkers and Lucky — until Lucky Piquel was replaced with a female cop named Miranda Wright), Gargoyles, and House of Mouse, and movies such as Hercules, The Hunchback of Notre Dame, Pocahontas and the Disney special edition of Alice in Wonderland (as the Cheshire Cat singing "I'm Odd"). Cummings also voiced the non-speaking roles of Ed the laughing hyena in 1994's The Lion King and Duncan the horse in The Simpsons episode "Saddlesore Galactica".

Other notable roles include "Mr. Bumpy" in the cult Claymation show Bump in the Night, Dr. Robotnik in Sonic the Hedgehog (SatAM) (he also voiced Robotnik and Scratch in the unaired pilot of the wacky Adventures; for that series Robotnik was played by Long John Baldry), Mayor Manx in SWAT Kats, Psy-Crow and Bob the Killer Goldfish in Earthworm Jim and Taz the Tazmanian Devil on Taz-Mania and a number of other projects.

In addition to Taz and Pooh, Cummings has over the years become the official voice for a number of legendary cartoon characters, including Tigger, Pete, Humphrey the Bear, Dick Dastardly, the Slag Brothers, Big Gruesome, Private Meekly, Clyde, and Morocco Mole. Cummings has also provided voices for video games, television commercials, and movie trailers, and was the announcer for Kids' WB! during that block's existence, as well as the voiceover for the current Cheez-It commercials.

In the world of video games, Cummings has done the voice of Minsc of Baldur's Gate/Baldur's Gate 2: Shadows of Amn and Drizzt Do'Urden in the first Baldur’s Gate: Dark Alliance game. He is also prominently displayed in the credits of Kingdom Hearts as Pooh, Tigger, and Pete. Cummings provided the voices for "Bad Mr. Frosty", "Hougan", and "Sumo Santa" in ClayFighter 63 1/3. In Ys Book I and II for the TurboGrafx-16 CD system, he is credited as voicing "Dalles", and he provided voices for minor characters in Gabriel Knight: Sins of the Fathers. He played several characters in the little-known Toonstruck. He also provided three of four of the voices of the main antagonist of Fallout, The Master. He also provides the voice of the Terror Mask in the 2010 Splatterhouse remake for the Xbox 360 and PS3. He did a significant amount of voice work for the most recent Elder Scrolls title; most "curmudgeonly" voices in the game are provided by him. He also voiced every male character in several of the Army Men franchise. Most recently, he's portrayed Lorewalker Cho in World of Warcraft. In addition, Cummings narrated the Epcot fireworks show at Walt Disney World, IllumiNations: Reflections of Earth.

Cummings has a notable cameo in Comic Book The Movie as an inebriated party-goer. This is one of very few live-action appearances. The movie stars many other voice actors, including Tom Kenny, Maurice LaMarche, Billy West and Mark Hamill.

Cummings even did make some vocal performances using his voice at normal pitch for some younger looking characters like Witterquick from Visionaries: Knights of the Magical Light and Buddy Boar from Taz-Mania.

Don't confuse him with the director of Thunder Road.

His voice-acting and acting credits include:

Tropes associated with Jim Cummings include: