The Sons and the Spears 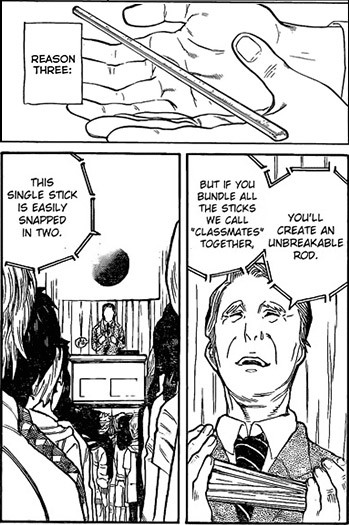 "Individually we are weak, like a single twig, but as a bundle we form a mighty faggot."
— Martin Prince, The Simpsons, "The Haw-Hawed Couple"
Advertisement:

An old story, Older Than Feudalism. The story goes something like this:

There is a king, said king has several sons. They don't get along. Fearing for the safety of his kingdom, the king decides to teach his sons a valuable lesson.

So he gathers his sons together and he tells them that he has a task for them: the son who can complete the task shall succeed him. He then takes out a bundle of spears (alternatively sticks or arrows) and asks his sons to break them. When none of his sons succeed he then takes the spears one by one and breaks them, thus impressing on his sons that in unity there is strength.

This is, as said, an old story, and various versions exists. It is also one that is relatively often referenced in various media.

Compare Thicker Than Water and Divided We Fall.