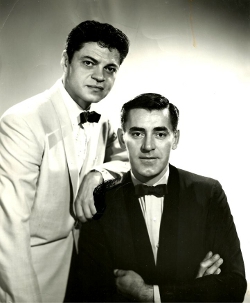 Running only one season (1959-1960), this series starred John Vivyan as Mr. Lucky, owner of a floating casino (later restaurant) anchored in international waters off the coast of an unnamed American city. Along with his partner, a streetwise Latin American named Andamo (Ross Martin), he dealt with the various shady characters and dangerous situations that popped up while doing business aboard the luxurious Fortuna II.
Advertisement:

A sister-show of sorts to Peter Gunn, since they were both created by Blake Edwards and shared many key personnel, including composer Henry Mancini. Based on the story Bundles for Freedom by Milton Holmes. (That story was also the basis of a 1943 motion picture with which this show shares its name but little else.)