Riddle of the Sphinx 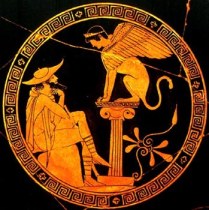 Riddle Me This!
"What walks on four legs in the morning, two legs in the afternoon, three legs in the evening, and no legs at night?"
Advertisement:

The classic riddle presented to Oedipus Rex by the Sphinx in Greek Mythology. He was the first one to solve it—all the others who failed were eaten by the Sphinx—after which she threw herself down a chasm. This is one of the oldest Stock Puzzles out there, going back to the Greek writer Apollodorus in the second century AD.

The answer? "A man." As a baby, a human goes about on all fours ("four legs in the morning"; morning = childhood), until he learns to walk, which he does so well into adulthood ("two legs in the afternoon"; afternoon = adulthood), until old age requires him to use a cane to support himself ("three legs in the evening", evening = old age), finally he dies ("no legs at night", night = death).

Versions of the story itself was told by oral tradition long before Apollodorus, and in the earliest versions, the exact riddle asked by the Sphinx was not specified by early tellers of the stories, and was not standardized as the one given in Apollodorus' version. (An additional part of the riddle, "The more legs it has the weaker it is", is usually omitted now.)

This trope is about the riddle; it may or may not be delivered by a sphinx. The more general trope for sphinxes that ask riddles is Riddling Sphinx.

Also see Riddle Me This, These Questions Three....