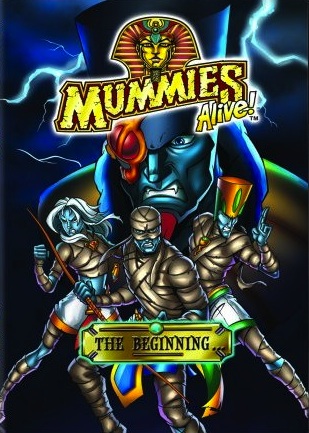 Ja-Kal's brother is apparently more important than the fourth member of the mummies.
"A little boy named Presley found a secret out this year.
That he was once a pharaoh when Egyptians ruled the world.
Now a sorcerer named Scarab tries to get him day and night.
But Presley has four guardians to protect his very life."
— The series' Expository Theme Tune
Advertisement:

Mummies Alive! is a 1997 animated series by DiC Entertainment that aired for one season, consisting of forty two episodes.

Presley Carnavon, a boy from San Francisco, discovers that he's the reincarnation of Prince Rapses. As such, he inherits four mummy bodyguards who defend him from the evil sorcerer Scarab, who's constantly trying to use the boy's soul to become immortal.

The mummies also have to contend with many gods and spirits from Egyptian myth summoned to the modern world, including Anubis, Set, Apep, Bastet, Sekhmet, and many others, who are usually a part of one of Scarab's schemes.