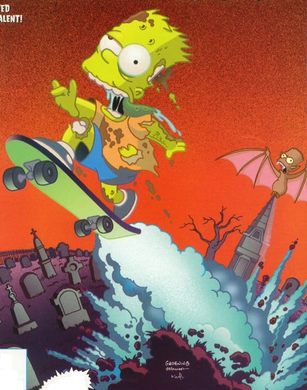 "Like a Bart out of hell
I'll be gone, gone, gone..."
Sam: Wait, let me get this straight—people can escape from Hell?
Devil: Yeah, it's a real problem we've been having lately. You know, with all the overcrowding? It's the influence, really; honestly, I blame myself.
— Reaper
Advertisement:

Some customers are just too tough to stay in the afterlife after they've checked out of the land of the living. Hell is supposed to be God's inescapable Alcatraz, but can any prison be truly called escape-proof?

This type of character usually has Unfinished Business in the world of the living. Not even being locked up in the underworld will stop them from their purpose, even if they have to carve a bloody path through The Legions of Hell to get out. Since Satan likely isn't very fond of anyone escaping his grasp, his minions may still be pursuing the escapee on Earth.

They could be described as a revenant, though sometimes they may only exist on Earth as incorporeal souls. This also raises the question of whether they can truly be considered "alive" or "dead", and if being killed would send them right back. Whether they return to the afterlife after their work is done also varies; maybe they go right back where they came from, but some ascend to Heaven instead for all the good they've done. Or they just stay on Earth, having grown fond of the outside.

The inverse of Dragged Off to Hell. Contrast To Hell and Back, where the heroes take a voluntary trip into Hell to wreak some havoc. Compare Rescued from the Underworld, when someone else broke them out of Hell; and Barred from the Afterlife, when they were kicked out of Hell. Compare Deliverance from Damnation, which is about the soul being brought from Hell to Heaven (without necessarily having to return to Earth on the way).